The Cartier Santos is not just any old watch; it is a piece of watchmaking history. Louis Cartier designed this extraordinary timepiece in 1904 for Brazilian aviation pioneer Alberto Santos-Dumont. Santos-Dumont had previously approached Cartier and requested a watch he could read without letting go of the flight controls. In response, Cartier developed a square watch with gently curved lugs. This design enabled the users to wear the watch on the wrist using a leather strap – a revelation in the era of pocket watches! Following the success of this initial model, the Cartier Santos went on to become one of the most sought-after timepieces of the early 20th century. It entered series production in 1911, making the Cartier Santos both the world’s first pilot’s watch and the first men’s wristwatch in history. 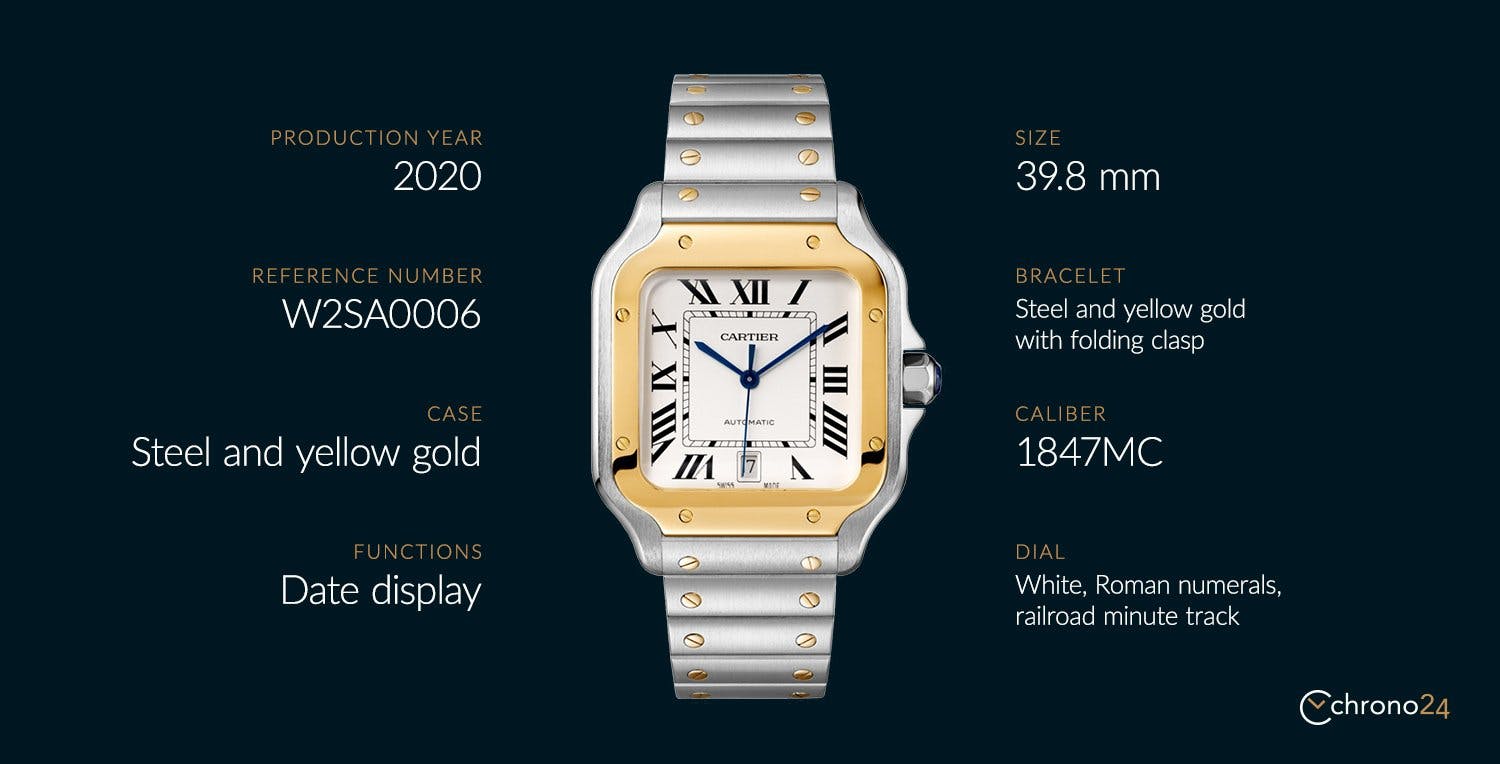 An overview of the Cartier Santos de Cartier

The Santos remains one of Cartier’s bestselling watches to this day. Its design has remained largely consistent over the years, and all the essential characteristics remain, including the square case, bezel with eight screws, Art Deco dial with large Roman numerals, and central railroad minute track. Although the timepiece remains true to the original design, Cartier has made a few minor additions. In 1978, for example, the luxury brand introduced a specially-designed metal bracelet with screws matching those found on the bezel. The crown, in turn, has been outfitted with a crown guard ever since the debut of the Santos 100 in 2004.

Cartier is much more willing to experiment with new materials than with bold design alternations. While the Santos was available exclusively in gold for several decades, you can now find the watch in stainless steel, titanium, platinum, ceramic, carbon fiber, and two-tone combinations. Such diversity also applies to the movements powering Santos watches. Early on, Cartier relied on calibers from Edmond Jaeger. Later models use movements made by Frédéric Piguet and the Swiss ébauche manufacturer ETA. The latter also supplies Cartier with their quartz movements. Current Santos models generally feature automatic in-house calibers.

What versions are available? 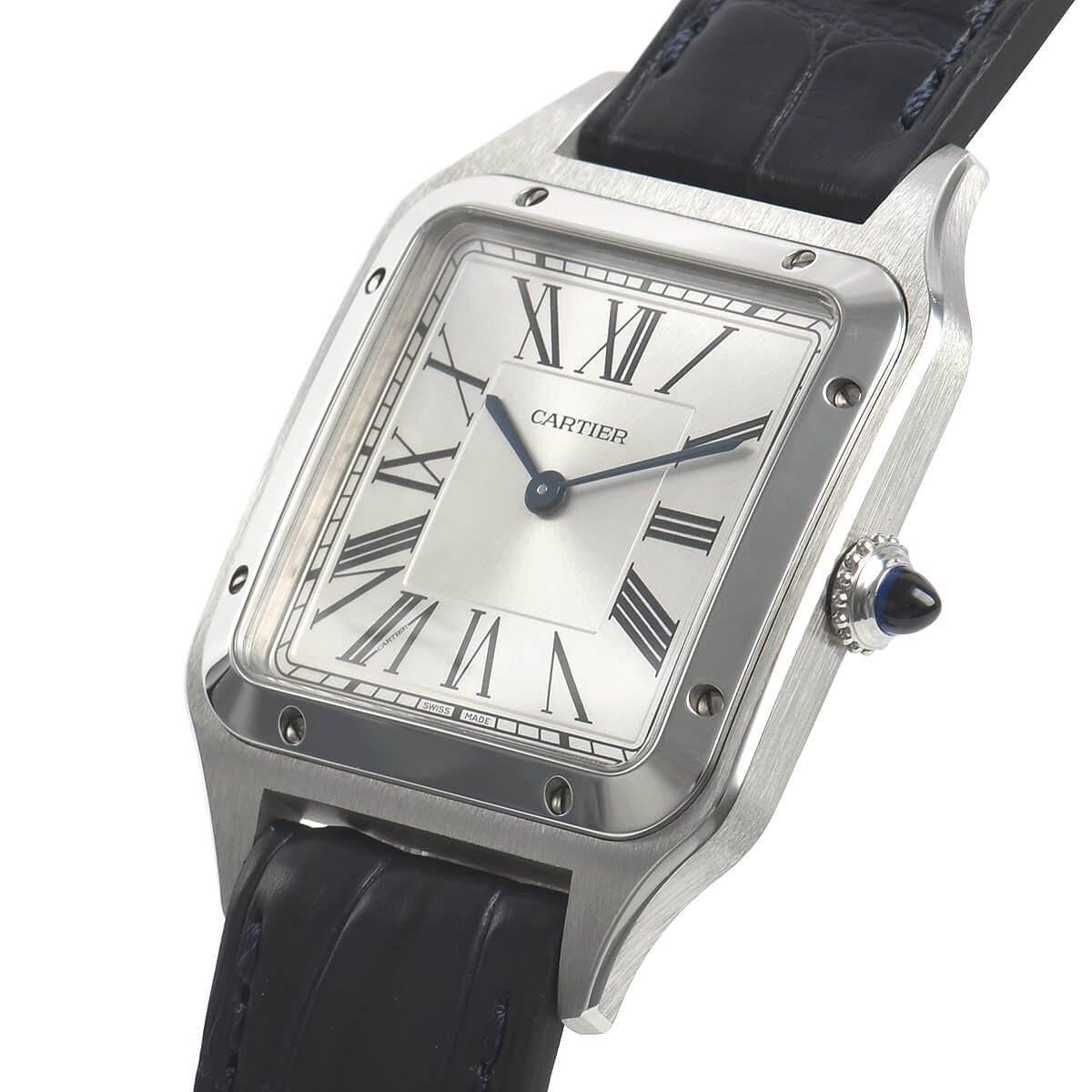 There are two lines in the current Santos collection: the Santos-Dumont and the Santos de Cartier. The Santos-Dumont was introduced in 2004 and is closest to the original Santos timepiece from 1904. This model’s most striking features are its beaded crown set with a blue cabochon and its square bezel with rounded corners. Like the original timepiece, this is a two-hand watch. One thing that has changed, however, is the location of the characteristic minute track. While it originally sat in the center of the dial, it has now moved to the outer edge.

The Santos-Dumont is available in yellow gold, rose gold, or stainless steel. Two-tone stainless steel and 18-karat gold versions are also on offer. If you’re looking for a timepiece encrusted with gemstones, you’re at the right place. Unisex versions outfitted with precise quartz calibers are available in two sizes: small (27.5 mm x 38 mm) and large (31.4 mm x 43.5 mm). The Santos-Dumont XL, on the other hand, measures in at 33.9 mm x 46.6 mm and is powered by the in-house, manual caliber 430 MC. The watches in this series all come on a high-quality alligator leather strap. 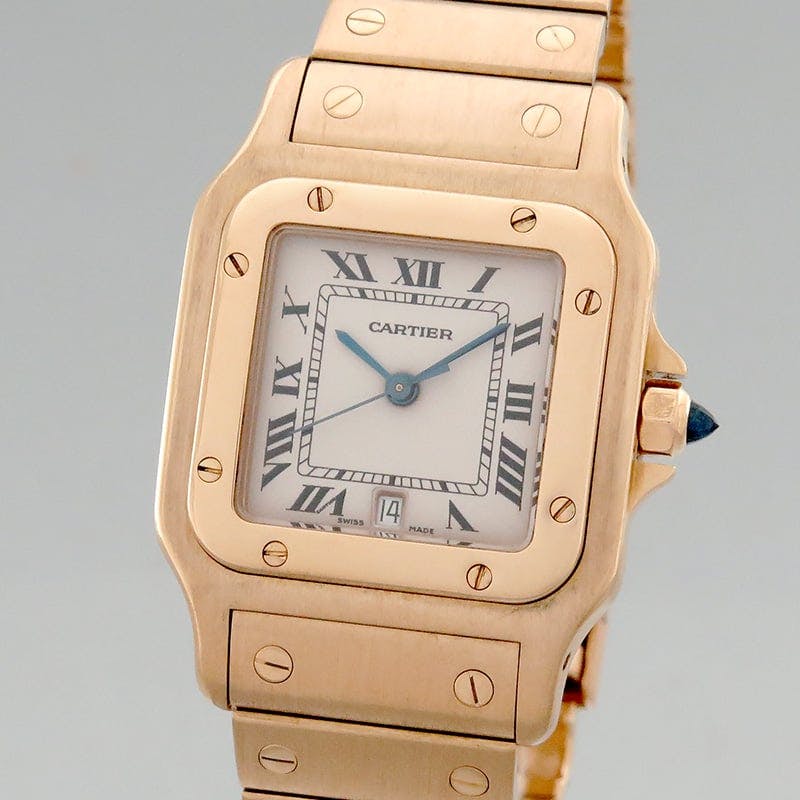 There is a wide selection of Santos de Cartier models available today. In addition to gold, stainless steel, and two-tone versions with three hands, the series is also home to chronographs and elaborately skeletonized models. The medium watch measures in at 35.1 mm, while the large is 39.8 mm. The XL version adds 4 mm to the case width. In-house calibers – such as the Cartier Santos 100, 1847 MC, and the manual 9611 MC – power these watches. 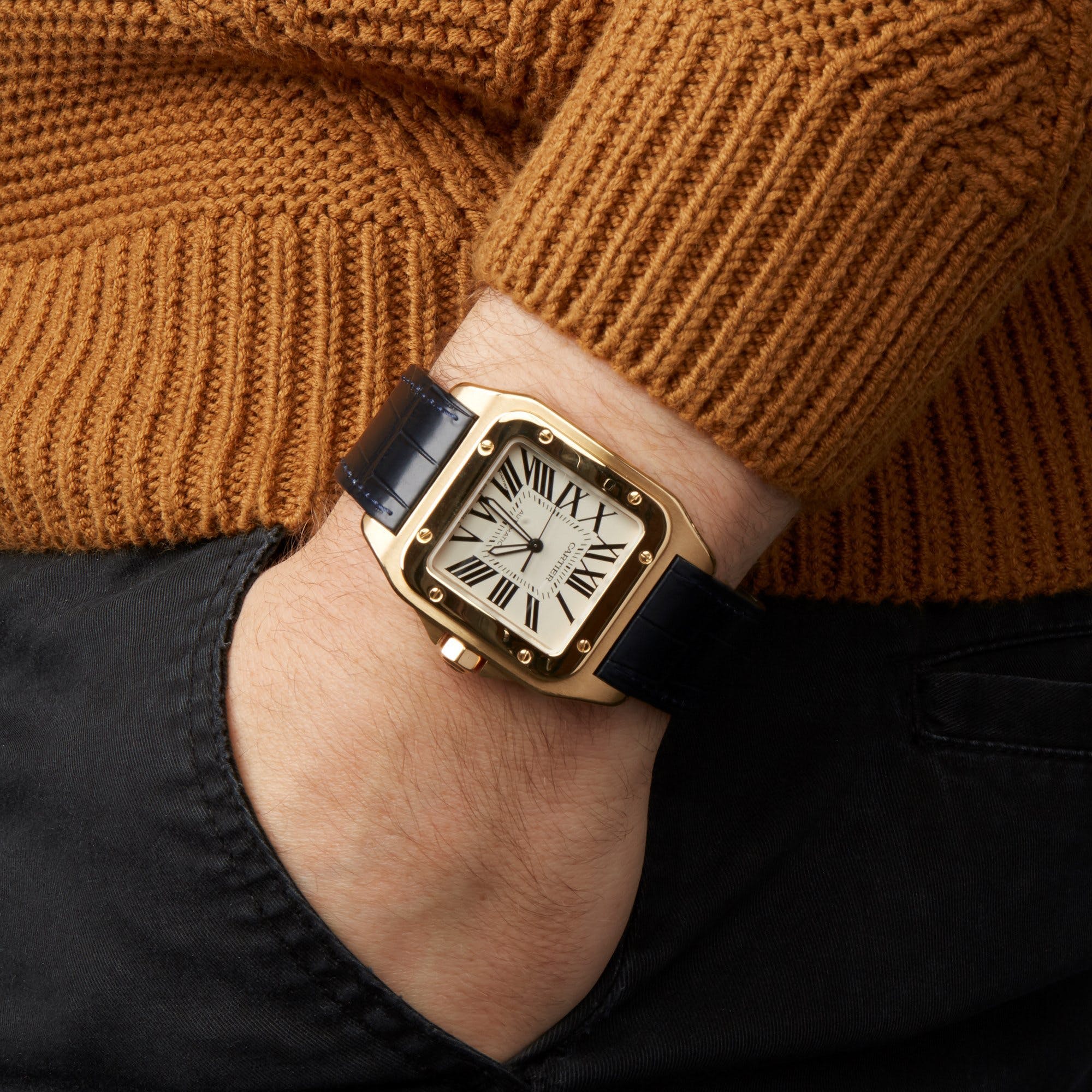 The predecessor to the Santos de Cartier is the Santos 100. This line premiered in 2004 in honor of the Santos’ 100th anniversary. This was the first Santos model to feature a crown guard. Moreover, these watches are more imposing than the original timepiece, especially the large 41 mm x 51 mm version. The Roman numeral hour indices grew proportionately with the case size.

The Santos 100’s modern nature also appears in the watch’s case materials. In addition to traditional gold or popular stainless steel, you’ll also encounter carbon and titanium versions. Moreover, you can find watches with black ADLC coating in this series.

ETA-based movements drive most Santos 100 watches. The Santos XL Skeleton and Santos XL Tourbillon, on the other hand, rely on the in-house calibers 9611 MC and 9452 MC, respectively.

The 1970s saw the advent of iconic luxury sports watches like the Audemars Piguet Royal Oak and Patek Philippe Nautilus. Cartier quickly acknowledged the trend and introduced a modern, stainless steel version of the Santos. They also debuted a new metal bracelet featuring distinctive metal screws to match the watch’s bezel design. Cartier judged the spirit of the times well and landed a big hit with this new and improved Santos, particularly the two-tone edition. 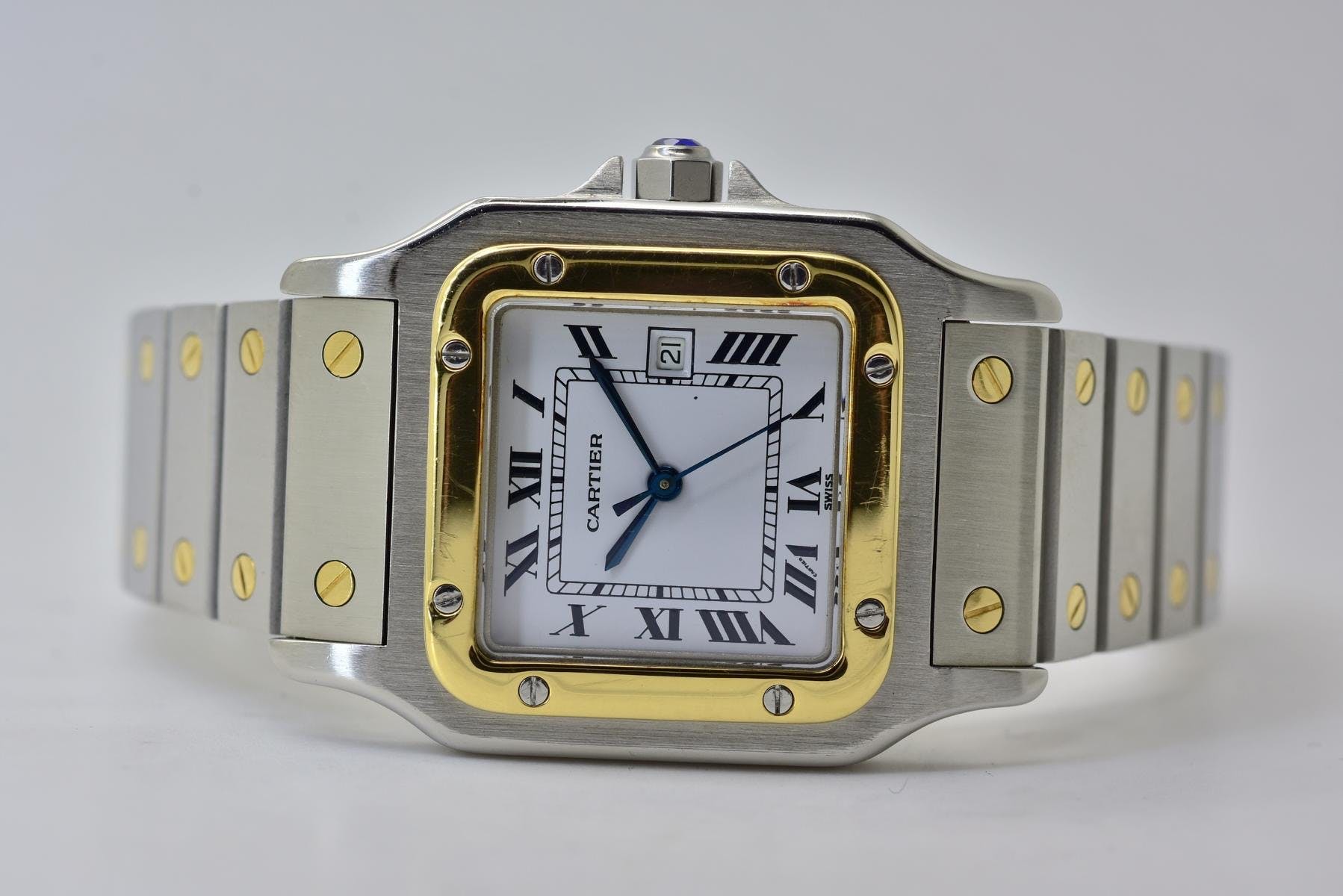 Cartier also kept up with trends when it came to movements. Many of their watches from this era use quartz movements. One example is the Santos Galbée from 1987. This edition of the Santos is slightly curvier than previous models, in large part due to its curved lugs. The new design is much more comfortable to wear, as it sits closer to the wrist. The Santos Galbée series remained part of the Cartier catalog until 2005.

The 1980s also gave way to the Santos Ronde. This watch sets itself apart with its round dial, round case, and octagonal bezel. Cartier produced both men’s and women’s versions of this timepiece. The manufacturer released stainless steel, gold, and two-tone editions of the watch, as well as both quartz and automatic models.

There are several alternatives to the Santos in the Cartier line-up. One particularly elegant option is the Panthère. At first glance, these two watches look remarkably similar. The Panthère boasts a similar dial, case shape, and square bezel with eight screws; however, its lines are somewhat softer and more refined due to its five-piece link bracelet. Moreover, Panthère timepieces are often encrusted with diamonds. 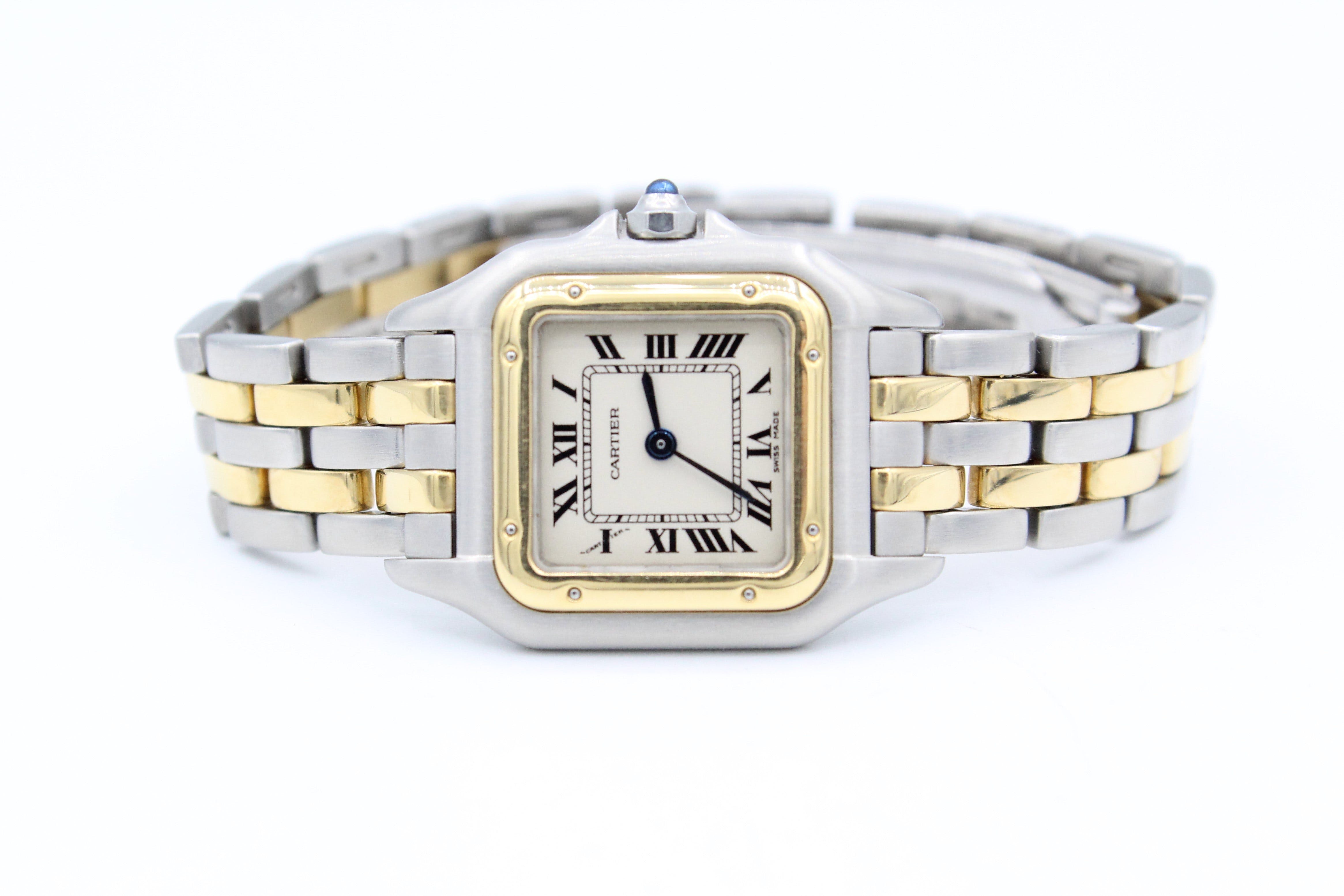 The Tank is another Cartier classic. Both the Tank and Santos collections feature striking Art Deco dials. The Tank, however, has a rectangular case rather than a square one. Nevertheless, it boasts a similarly sleek, geometric look.

If you’re looking for a square watch with slightly more modern features, you might want to check out the TAG Heuer Monaco. Initially developed as a racing chronograph in the 1960s, the Monaco now enjoys cult status similar to that of the Santos. 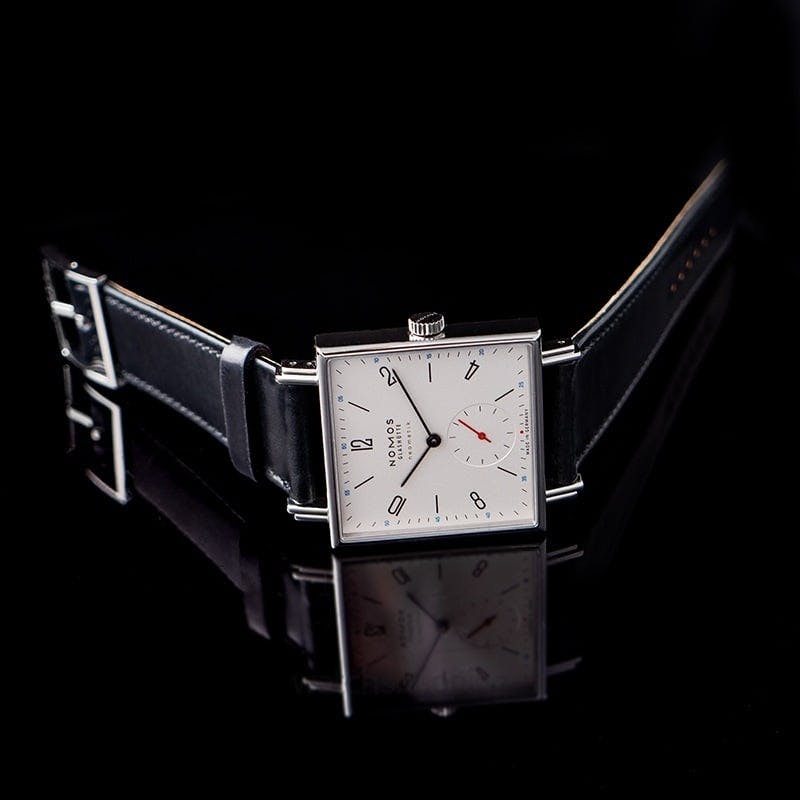 If you prefer more modest designs, you should take a closer look at the NOMOS Tetra. This Bauhaus-inspired timepiece has a clean and classic look and is available in a wide range of modern color options.

How much does the Cartier Santos cost?

Prices vary greatly for the Cartier Santos due to the numerous variants. You can purchase current models like the small Santos-Dumont with the reference number WSSA0023 for as little as $3,300 on Chrono24. Two-tone versions like the ref. W2SA0012 are more expensive at around $4,700. A large rose gold Santos-Dumont, on the other hand, will set you back closer to $11,000.

Santos de Cartier models cover a similarly wide range of prices. While stainless steel versions like the ref. WSSA0029 sell for around $6,200, the XL chronograph with a black-coated bezel (ref. WSSA0017) costs closer to $8,500. Unsurprisingly, diamond-set models are significantly more expensive. The rose gold Santos de Cartier Skeleton with diamonds is priced around $46,000.

You can find a lot of vintage Santos models from the 1970s and 1980s on Chrono24. These are typically powered by quartz movements and available with two-tone cases, in line with the trends of the era. Prices for these watches range from $1,700 to $3,500, depending on the watch’s model and condition.

If you’re looking to buy a current Cartier Santos, you can save up to 20% off the recommended retail price by shopping on Chrono24. That said, these watches enjoy relatively stable prices, so you don’t have to worry about it losing a lot of its value if you decide to sell at a later date. Many Santos timepieces even appreciate in value, especially those from discontinued lines. The Santos 100 ref. 2656, for example, cost just $4,600 two years ago. Today, a mint-condition model will set you back closer to $6,600. The Cartier Santos, therefore, definitely has potential as an investment piece.

My name is René Herold, and I first discovered Chrono24 in a job listing. Admittedly, I didn't really care about watches before coming to Chrono24. However, after a few …

Three Watch Innovations That Didn’t Quite Make It

The Most Popular Seiko Models on Chrono24