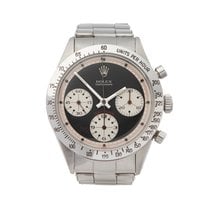 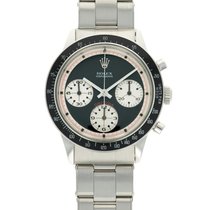 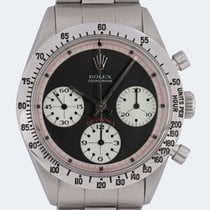 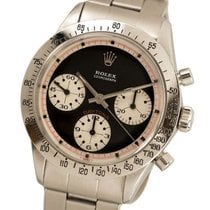 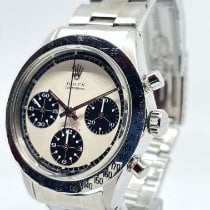 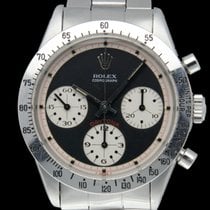 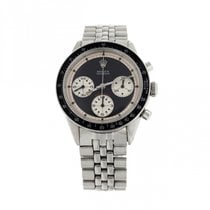 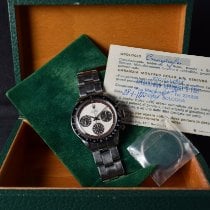 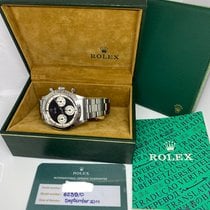 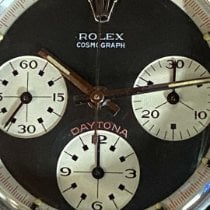 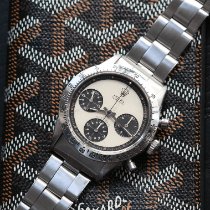 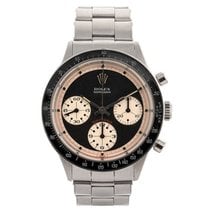 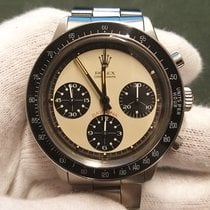 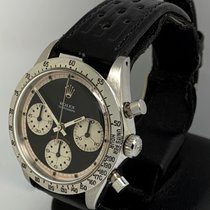 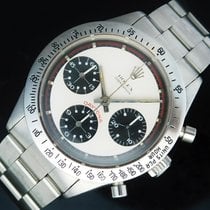 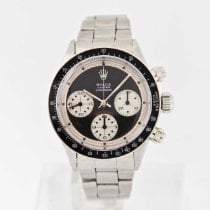 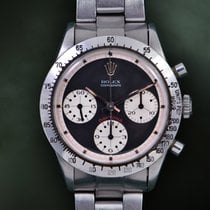 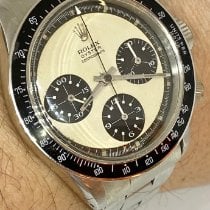 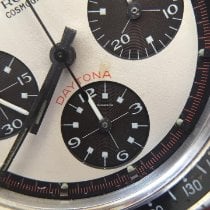 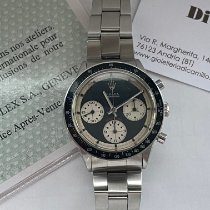 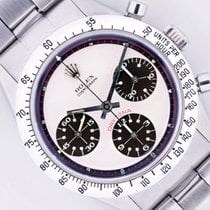 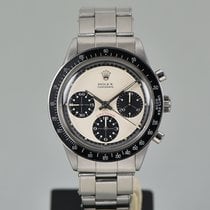 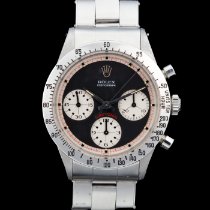 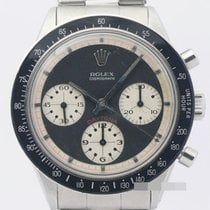 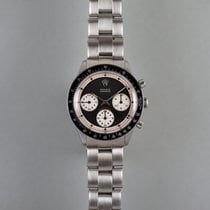 The Rolex Paul Newman Daytona is one of the world's most highly coveted vintage watches. Newman's personal Daytona, which he wore for 15 years, sold for 17.75 million USD at an auction in 2017, making it the world's most expensive Rolex.

The Rolex Paul Newman Daytona is one of the most sought-after watches in the world. Defining features of vintage Paul Newman Daytonas include their multicolored "exotic" dials and Art-Deco-style numerals. Back in the 1960s and 70s, this look was not nearly as well-received as it is today, resulting in very low production numbers. This rarity – combined with the fact that famous actor and race car driver Paul Newman wore his watch every day – has only fanned the flames of the Daytona legend. In turn, this chronograph is now one of the most expensive vintage watches on the market.

Be sure to keep your eyes out for an "exotic dial." Many watches bear one of the aforementioned reference numbers but feature a standard Daytona dial. You should always do your research before making a purchase, as some watches will come with an "exotic dial" that is not original to that timepiece. The original papers and an easy-to-understand service history are good places to look for this information.

How much does a Paul Newman Daytona cost?

Prices for a Paul Newman Daytona largely depend on the exact model and its condition. On the low end are well-maintained watches with the ref. 6239, which cost around 223,000 USD on Chrono24. Paul Newman himself wore this edition, and his personal timepiece became the most expensive Rolex of all time when it sold at a Phillips auction for 17.75 million USD in October 2017.

Compared to such an astronomical price, the 940,000 USD required for a Daytona Paul Newman John Player Special ref. 6241 seem almost affordable. This gold chronograph is among the rarest and most expensive Paul Newman Daytonas. Defining characteristics include its black and gold dial in 14-karat gold and Art Deco numerals on the subdials. Fans dubbed this watch the "John Player Special" because it shares its black and gold color scheme with John Player Special cigarette cartons and the race car produced as a result of the tobacco company's partnership with the Lotus Formula 1 team in the 1970s.

When it comes to stainless steel Paul Newman Daytonas, most cost between 230,000 and 355,000 USD. Particularly rare models like the ref. 6263 occasionally surface at auctions, where they sell for over 585,000 USD.

The ref. 6241 is almost indistinguishable from the 6239 and also features an "exotic dial." The only difference is its black acrylic bezel as opposed to the 6239's stainless steel bezel. Rolex produced fewer 6241 watches than 6239s. Therefore, the 6241 is even rarer and more expensive. Both get their power from the manual Valjoux chronograph caliber 722. Plan to spend over 255,000 USD for a Daytona 6241 with an exotic dial in very good condition. The "standard" edition without a Paul Newman dial sells for as little as 82,000 USD.

Another interesting Rolex Paul Newman Daytona model bears the reference number 6262. This chronograph looks just like the Daytona 6239 but has a different caliber. Rolex outfitted the 6262 with the Valjoux 727, an improved version of the Valjoux 722. While the Valjoux 722 ticks at 18,000 vibrations per hour (vph), the Valjoux 727 has a frequency of 21,600 vph. Today, the Paul Newman Daytona 6262 is incredibly difficult to find since the manufacturer ceased production after only one year. When one does show up at auction, it generally goes for about 235,000 USD. The Daytona 6262 without an "exotic dial" is much more affordable, with prices ranging from 64,500 to 94,000 USD.

The Daytona 6264 is an equally rare sight. This timepiece also uses the Valjoux 727. Unlike the 6262, the 6264 has a black acrylic bezel. The 6264 often sells for over 350,000 USD at auction. Versions without the Paul Newman dial are decidedly less expensive.

The Paul Newman Daytona with an Oyster Case

Models with reference numbers 6265 and 6263 are also available in the Paul Newman look. However, the manufacturer gave these timepieces some new features, including a somewhat thicker Oyster case and screw-down push-pieces at 2 and 4 o'clock. Furthermore, in addition to the multicolored dial, these watches are also available with a two-tone black and white dial in the classic "panda" or "reverse panda" style. Either "Rolex Oyster Cosmograph" or "Rolex Cosmograph Oyster" appears inscribed beneath the Rolex logo at 12 o'clock. The latter version is especially rare. Rolex had previously used the inscription "Rolex Cosmograph" on the dials. The Valjoux caliber 727 powers both references. Rolex outfitted the 6265 with a steel bezel, while the 6263 has a black acrylic bezel.

Be sure to set aside at least 410,000 USD for a Rolex Paul Newman Daytona with the reference number 6265. A standard 6265 without the special dial is significantly less expensive. These models go for as little as 68,500 USD in very good condition.

The 6263 with a panda dial is one of the most highly coveted and expensive versions of the Rolex Daytona Paul Newman. One such timepiece sold for 1.1 million USD at a Christie's auction in 2013. Depending on its condition, this watch requires an investment of between 585,000 and 1.8 million USD. The standard edition of this Daytona only costs about 176,000 USD.

You can recognize a Rolex Paul Newman Daytona by its dial. It may be hard to believe, but the dial is all that separates the Paul Newman from other Daytona models. Daytonas with a black or white Paul Newman dial stand out with their contrasting subdials at 3, 6, and 9 o'clock and matching minute track. The indices around the outside of the dial are often red. Connoisseurs call this multicolored design an "exotic dial." The term "panda dial" refers to the two-tone version. Panda dials tend to be white with black subdials. Those with a black dial and white subdials are referred to as "reverse panda" dials.

If you examine the Rolex Paul Newman Daytona's subdials more closely, you'll find additional differences to standard Rolex chronographs. Paul Newmans have numerals in an Art Deco style and a small square at the end of each index. The numbers 15, 30, 45, and 60 are visible on the small seconds dial at 9 o'clock. Conventional Daytonas only feature 20, 40, and 60 on the small seconds subdial. Furthermore, there's a small gap between the outer minute track and the subdials on the Paul Newman. Many also have red indices on the edge of the dial, enabling you to measure times to within a fraction of a second.

From a technological standpoint, standard Cosmograph Daytona models from the 1960s and 70s are identical to the Paul Newman Rolex. The only difference is the dial. Since versions with exotic dials didn't sell well, Rolex only produced them in very limited numbers. This is why Paul Newman Daytonas are so rare today, which increases the demand and price. It was most likely Italian watch collectors who catapulted the timepiece to fame. Today, it is one of the world's most desirable {keyword-vintage watches,vintage watches}.

What to Note When Buying This Timepiece

Every Rolex Paul Newman Daytona, regardless of its reference number, is incredibly rare. You should pay attention to the original condition of the Paul Newman Daytona when purchasing one. There are many, many watches with fake Paul Newman dials, as well as convincing replicas. You'll often find standard Daytona models that someone later fitted with a panda or exotic dial. They look like a Paul Newman but aren't. Get as much information from the seller as possible before you make a purchase and review everything carefully.

Rolex is not currently producing any new Paul Newman Daytonas. If you're interested in a modern stainless steel model, you should consider the ref.116500LN. This Cosmograph Daytona is available with a white or black dial and has a bezel made of black ceramic. The in-house caliber 4130 powers this chronograph and has a 72-hour power reserve. This stainless steel watch is so popular that wait times of a few years are the norm when purchasing from an offline retailer. If you don't feel like waiting, you can buy one online on Chrono24 now. Never-worn versions cost around 26,500 USD.

There are also other companies, such as Project X and Blaken, that offer modified Daytona watches. Since the Paul Newman Rolex is in such high demand, both companies have made limited editions designed after the vintage watch. The watches from Project X demand around 21,000 USD new. Pre-owned Blaken Daytonas sell for about 22,500 USD, while mint-condition pieces change hands for roughly 35,000 USD.

The Daytona as a Gift

Paul Newman was a big fan of the Rolex Cosmograph Daytona. He owned several versions of this chronograph, including a ref. 6263 and a Daytona with an El Primero movement. His second wife, Joanne Woodward, gave Newman his ref. 6239 as a gift while he was filming "Winning" in 1969. Its case back features an engraving that reads "Drive Carefully Me." This exact watch sold for the record price of 17.75 million USD at an auction in New York in October 2017, thus proving the Paul Newman Daytona's massive popularity. When Newman gifted the watch to his daughter's then-boyfriend in the 1980s, it had an estimated value of 247 USD.

Before Newman gave the timepiece away, it had served as his constant companion, which is why there are so many pictures of him wearing it. His preferred band was a black military strap. The "exotic" dial of Newman's 6239 is white with black trim and black subdials. There are also versions of the 6239 with a black dial and white subdials. The "Daytona" inscription sits above the 12-hour counter at 6 o'clock. If you can do without the "exotic" dial, you can purchase a vintage ref. 6239 for between 41,000 and 47,000 USD.