Our Most Popular Models 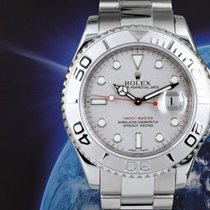 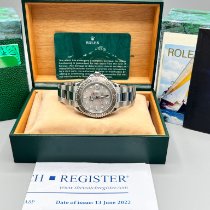 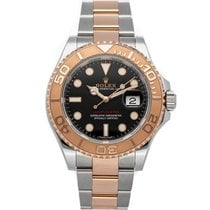 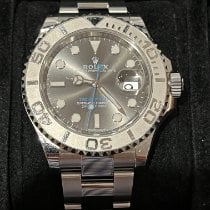 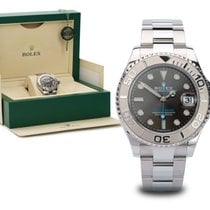 Rolex Yacht-Master: For Skippers and Investors

The Rolex Yacht-Master thrives on the open water, but it is also perfectly content with the day-to-day. What's more, this stainless steel watch has been steadily appreciating in value and has thus become a profitable investment.

A Luxury Watch for Sailors

Rolex and water sports have a history that stretches back to the 1950s. The Yacht-Master has been sharing the stage with other popular models like the Submariner and Sea-Dweller since 1992. However, unlike its deep-diving brethren, the Yacht-Master is the premier timepiece for skippers.

Thanks to the wide range of available case sizes – from 29 to 42 mm – the Rolex Yacht-Master is perfect for both men and women. In terms of material, you can choose from various models in 18-karat gold, as well as two-tone editions that combine gold or platinum with type 904L stainless steel. Rolex calls this steel alloy "Oystersteel." Other Rolex-specific terms include "Rolesor" for two-tone watches in stainless steel and gold and "Rolesium," which is exclusive to the Yacht-Master series and pairs a stainless steel case and bracelet with a bezel in 950 platinum.

Unlike the Submariner and Sea-Dweller, which have unidirectional bezels, the Yacht-Master's bezel is bidirectional. Some models feature bezel inlays made of scratch-resistant ceramic. The Yacht-Master's case is water-resistant to 100 m (10 bar, 328 ft), meaning it can join you while you swim or snorkel.

The collection's top model is the yellow gold Yacht-Master II with a regatta chronograph. This countdown function is provided by the caliber 4161 and is especially practical for water sportsmen, though it also has many uses in everyday life.

Yacht-Master models have been enjoying growing popularity for some years now, ⁣ and prices are rising along with the demand. The Everose gold ref. 268655 is taking the lead, appreciating by 77% between May 2020 and May 2022. Second place goes to the ref. 12662, which rose in value by over 62% in the same timeframe.

Reasons to Buy a Rolex Yacht-Master

Prices at a Glance: Rolex Yacht-Master

How much does a Rolex Yacht-Master cost?

About the Rolex Yacht-Master

The ref. 126655 is 40 mm in diameter and made of 18-karat Everose gold. Rolex pairs this watch with an Oysterflex bracelet. While it may seem like a strap thanks to its outer Elastomer rubber shell, inside the bracelet, you'll find a series of flexible metal inserts. Finally, a black Cerachrom ceramic inlay sits within the watch's Everose gold bezel. You can purchase this Yacht-Master 40 in mint condition for about 42,000 USD. The earlier ref. 116655 houses the caliber 3135 and costs about 2,100 USD less. Between May 2020 and May 2022, both of these references appreciated by about 70%.

Rolex offers the Yacht-Master 40 in Rolesium, a combination of stainless steel and platinum that exudes a sense of understated elegance. This Rolesium timepiece has a stainless steel case and three-piece link Oyster bracelet, while its bezel shines in 950 platinum. As of 2019, the Rolesium Yacht-Master gets its power from the caliber 3235. You can find this model under the reference number 126622, and it sells for about 20,500 USD new. It's worth noting that you can save around 2,100 USD by purchasing the previous edition, the ref. 116622.

Prices for the Rolex Yacht-Master 42

If you prefer the Yacht-Master with a 42-mm case, you should be on the lookout for the ref. 226659. This model debuted in 2019. It features an 18-karat white gold case and the caliber 3235. The bezel has a black Cerachrom inlay with a black 60-minute scale. This watch comes on a matching black Oysterflex bracelet. A never-worn Yacht-Master 42 ref. 226659 requires an investment of around 40,000 USD, 35% more than what you would have paid two years ago.

The Yacht-Master 37 is the current collection's smallest model, and its moderate case size actually makes it suitable as a unisex watch. This timepiece is powered by the caliber 2236 – which boasts a 55-hour power reserve – and is outfitted with Rolex's proprietary silicon Syloxi spring. This type of balance spring is more resistant to magnetic fields and offers a higher level of precision. Like every Rolex, the Yacht-Master 37 is a Superlative Chronometer.

Rolex offers the 37-mm Yacht-Master in various materials, including Everose gold, Rolesor, and Rolesium. The Rolesium edition has the reference number 268622 and changes hands for about 13,500 USD new. The Yacht-Master Chocolate ref. 268621 is particularly popular among Rolex fans. As the name suggests, it features a chocolate brown dial which is paired with a stainless steel and Everose gold case. You'll now need to invest around 17,500 USD for one of these Yacht-Master watches in mint condition, as it has appreciated by over 50% in the last two years. The ref. 268622 saw a slightly less dramatic value appreciation of 18%.

How much does a Yacht-Master II cost?

Not only does the Yacht-Master II have the ability to stop time with its counter, it is also the world's first mechanical watch to feature a programmable countdown with a memory. Previously, this function was only available in quartz-powered timepieces.

Unlike most traditional races, regatta races don't begin at the starting line. Instead, the racers wait near the starting line for the start signal. The Yacht-Master II's regatta chronograph function enables racers to get over the start line as quickly as possible after the signal.

Taking all of its functions into consideration, the Yacht-Master II is one of Rolex's most complicated watches. And with a diameter of 44 mm, it's also one of Rolex's largest.

There is a wide variety of materials to choose from, including stainless steel, yellow gold, a two-tone stainless steel and Everose gold model, and another edition in white gold and platinum. The entry-level model is the ref. 116680 in stainless steel, costing around 24,000 USD new. This model has also seen significant appreciation in the last two years, increasing in value by 54%.

You can find the two-tone edition in stainless steel and Everose gold under the reference number 116681. This regatta chronograph appreciated by almost 40% in two years, and now demands 30,000 USD new.

The Yacht-Master's design closely resembles that of the Submariner – from the celebrated Oyster case and the three-piece link Oyster bracelet to the crown protector and the date display with a Cyclops lens at 3 o'clock. Even the hour and minute hands and indices are reminiscent of those on the Submariner.

However, if you look more closely, you will notice subtle differences. The Yacht-Master's inscription and second hand are red, the crown guard is a bit bigger, and its case's edges are rounded. The most noticeable difference is the bezel: The polished 60-minute graduations are raised, standing out against the matte background. In addition, its bezel can turn in both directions, while the Submariner's cannot.

Aside from the various case size and material options, there are also several dials available. Traditional black dials create a contrast against the lighter indices, which glow blue at night. Dark blue dials emphasize the watch's relationship to water and catch the eye immediately, jumping into view from far away. Rolex also offers dials made of mother of pearl or platinum.