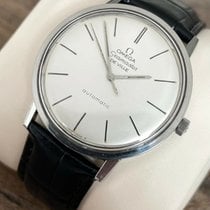 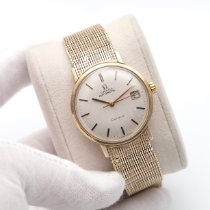 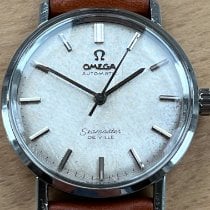 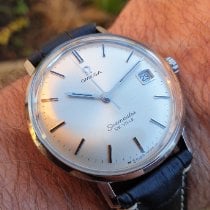 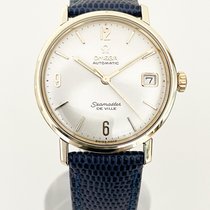 The Seamaster De Ville was part of the Omega catalog in the 1960s. Later De Ville lines all stem from the original vintage timepiece. This simple three-hand watch includes an automatic or manual movement, with or without a date display.

The Seamaster in a Unishell Case

The Unishell case is one of the most important details of the Omega Seamaster De Ville. The case is one solid piece and, thus, lacks a screw-down case back, meaning you can only service the movement from the front. The Unishell case is also the biggest difference between this timepiece and the original 1948 Seamaster, which features a classic snap-in case back. The Seamaster De Ville followed eleven years later and remained in production until 1967. Since then, the De Ville has existed as an independent collection.

Over time, the Seamaster and De Ville have grown apart. Despite still having "Seamaster" in its official name, the modern De Ville has very little to do with Omega's professional diving watch. In fact, the De Ville's case can only resist splashes of water at most, meaning swimming and diving are out of the question.

Omega offered the Seamaster De Ville in various stainless steel or gold editions. You'll find timepieces with automatic or manual movements. There are also models with or without a date display. Shatterproof plexiglass protects the dial and hands. In the 1960s, the model's 34-mm case size was groundbreaking; today, it is on the smaller side for a men's watch.

How much does an Omega Seamaster De Ville cost?

Prices for an Omega Seamaster De Ville start around 720 USD, making it one of the most affordable vintage Omega timepieces. However, well-maintained automatic watches in 18-karat gold like the ref. 165.020 can cost up to 2,300 USD. Lower-karat gold editions sell for about 1,800 USD. Whether the movement is automatic or manual has very little influence on the price. Instead, the watch's condition and how often it's been serviced are much more important. The presence of the original box and papers also increases the watch's value.

About the De Ville's Design

Omega released many Seamaster De Ville models over the course of its ten-year production run. The main difference between the versions is their calibers. However, you'll also find a wide range of dial designs. Most feature narrow bar indices, though some have numerals or, like the original Seamaster, triangular indices at 3, 6, 9, and 12. There are also editions with Arabic numerals instead of triangles.

Omega equipped early models, such as the ref. CK 14740 from 1959, with dials featuring "Seamaster" as the sole inscription. They didn't add "De Ville" to the dial until 1962. Then, in 1967, the word "Seamaster" disappeared, leaving "De Ville" as the only dial inscription.

The three-subdial chronograph has a minute counter at 3, an hour counter at 6, and a small seconds at 9 o'clock. The central chronograph seconds hand tracks elapsed seconds and fractions of a second. A tachymeter scale around the dial's edge enables the wearer to calculate speeds. Applied hour indices with luminous tips and an applied Omega logo sit atop the dial. Luminous material also fills the hour and minute hands.

The caliber 861 powers the ref. 145.018. Omega also outfitted the Speedmaster Professional Moonwatch with this movement starting in 1968.

While the 145.018's case is only 35 mm in diameter, it looks somewhat larger thanks to its slim polished bezel. All in all, the De Ville chronograph resembles pre-Daytona Rolexes, but with a much friendlier price tag. You can purchase a two-subdial ref. 145.017 for about 3,400 USD. For comparison, a similar vintage Rolex chronograph like the ref. 6238 costs upwards of 44,000 USD.