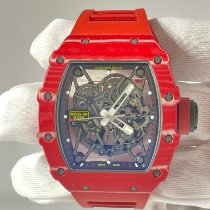 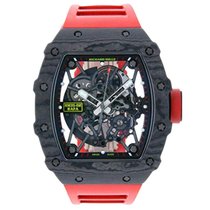 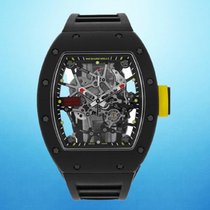 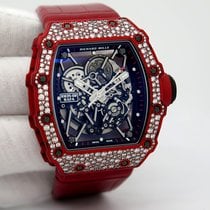 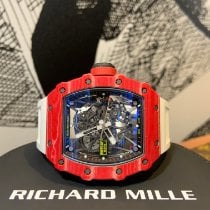 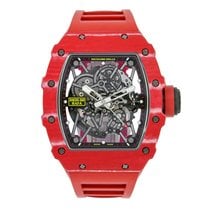 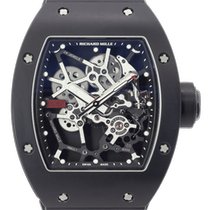 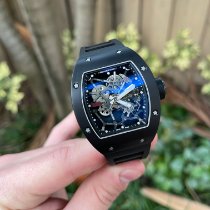 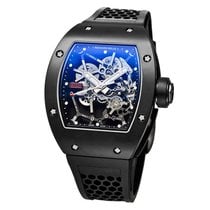 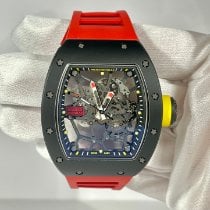 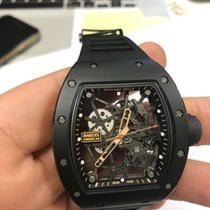 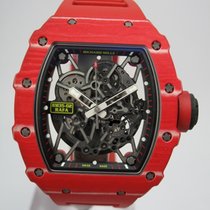 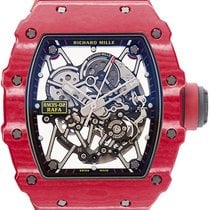 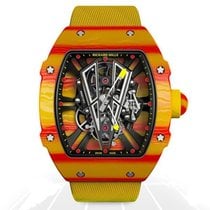 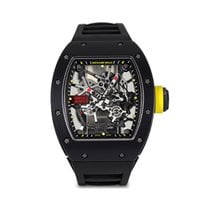 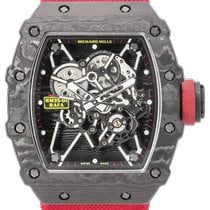 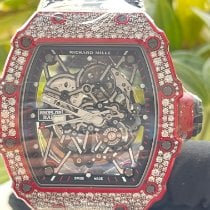 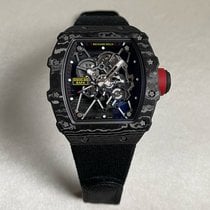 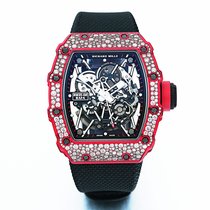 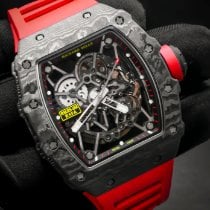 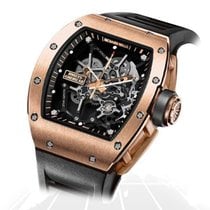 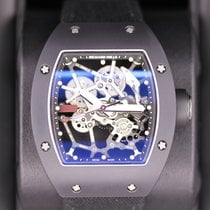 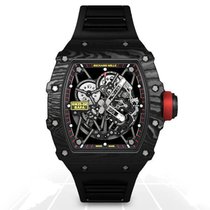 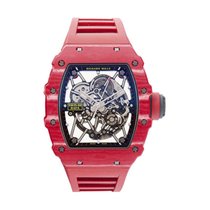 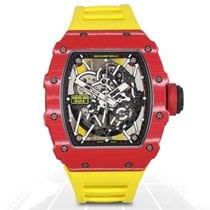 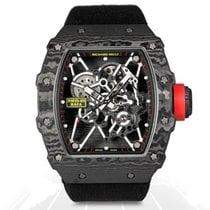 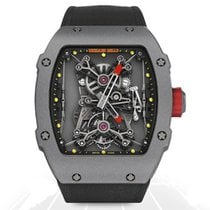 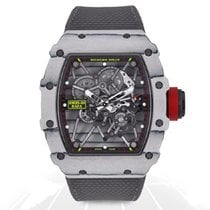 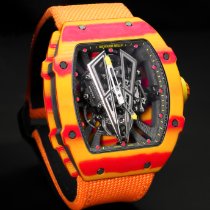 AU
Save this search

For Life on and off the Tennis Court

Have you ever wondered which watches Rafael Nadal wears during his tennis matches? As it turns out, the Spaniard swears by lightweight Richard Mille timepieces both on and off the court. Nadal and the Swiss luxury watch manufacturer began working together in 2008, with the first result of this collaboration making its debut on center court at the 2010 French Open. Nadal has exclusively worn these timepieces in his private and professional lives ever since. The RM 27-03 is one of the latest Rafael Nadal watches. It had an official list price of 725,000 USD in 2017. Only 50 copies exist of this tourbillon watch. Its case is made of quartz TPT and demands attention with its bright red and yellow color scheme. What's more, this timepiece can survive up to 10,000 g's of force, meaning no serve, forehand, or backhand shot will affect its accuracy.

Every Richard Mille Rafael Nadal watch is extremely light and robust thanks to the use of state-of-the-art materials. This is why Nadal can wear these timepieces on the court without even noticing they're there. Most recently, he wore the RM 27-03 with a tourbillon while claiming his 12th French Open title in 2019.

One of Nadal's Richard Mille watches was stolen after the 2012 French Open final, where he defeated Novak Djokovic. The watch, worth some 376,000 USD, disappeared from Nadal's hotel room under mysterious circumstances. This must've caused quite a scare for Nadal, considering he was only borrowing the timepiece. Luckily, the police quickly located the watch and announced they had arrested a suspect.

Nadal and his greatest rival, Roger Federer, are both among the greatest tennis players of all time. However, unlike Nadal, the Swiss maestro is the face of the Genevan watch company Rolex. Federer owns a Daytona from his birth year, 1981. His wife, Mirka, also gifted him a vintage watch on his 30th birthday.

How much does a Richard Mille Rafael Nadal watch cost?

After partnering with Rafael Nadal, Richard Mille wanted to produce a shock-resistant tourbillon watch that could withstand the stress and extreme forces experienced during a tennis match. The first result, the RM 027, debuted in 2010 and is among the lightest mechanical timepieces with a tourbillon. Its skeletonized movement weighs less than 4 g. Richard Mille achieved this by making the caliber out of titanium and a lithium alloy, LITAL®. The alloy also makes the caliber more shock resistant. The carbon case measures roughly 40 x 48 mm. Altogether, the case and movement weigh around 13 g. A synthetic strap with a clasp brings the watch's total weight to a remarkably light 20 g.

Since the Richard Mille RM 027 Tourbillon Rafael Nadal is limited to a run of 50 pieces , these timepieces rarely pop up on the pre-owned market. The watch had a list price of 525,000 USD at its introduction. Today, the RM 027 demands around 560,000 USD.

How much does the Richard Mille RM 27-01 Rafael Nadal cost?

Three years after the RM 027, Richard Mille released the second Nadal watch, the RM 27-01. Perhaps the most interesting feature of this timepiece is its new shock protection system. The manufacturer uses 0.35-mm thick steel threads to keep the movement in place. This new shock absorption mechanism means this tourbillon watch can withstand over 5000 g's of force.

The 46 x 39-mm case is made of special, anthracite-colored carbon nanotubes. Like the RM 027, its tourbillon caliber is composed of titanium and a lithium-aluminum alloy commonly used in the aerospace industry. This Nadal watch also had a limited run of 50 pieces and cost 690,000 USD at its launch in 2013.

The Richard Mille RM 27-02 Rafael Nadal gives a whole new meaning to the term quartz watch. This usually refers to timepieces with affordable, battery-powered movements. However, you won't find a quartz movement ticking away inside the RM 27-02; it's powered by a heavily skeletonized manual caliber with a tourbillon.

The case of this Nadal watch is made of quartz and carbon. This mix of materials is especially light yet robust. Hundreds of wafer-thin quartz layers are stacked to form the case, giving it a unique texture. Richard Mille uses quartz for the front and back of the case while using layers of carbon for the case's main body.

Their use of the movement's base plate as the case back is also revolutionary. The final timepiece measures roughly 40 x 48 mm. A striking orange textile strap keeps this Richard Mille Rafael Nadal watch securely on the wrist. Only 50 copies exist of the RM 27-02, which has a list price of around 775,000 USD.

The RM 27-03 debuted in 2017 and has since made several Grand Slam appearances. As a nod to the Spanish flag, its quartz TPT case has a red and yellow color scheme. Richard Mille crafts this colorful case by impregnating layers of silica only 45 microns thick with tinted artificial resin. The final result is both light and durable. What's more, the case can survive up to 5 bar (164 ft, 50 m) of pressure.

The tourbillon and its cage also make the RM 27-03 truly special. Together, they can withstand up to 10,000 g's of force. For comparison, jet pilots in training "only" have to endure 9 g's, which is already enough to push most people to their limits. Furthermore, the tourbillon's bridges resemble the head of a bull, a symbol associated with Spain and Rafael Nadal.

The Richard Mille RM 035 entered the market in 2011 and is considered one of the "more affordable" Rafael Nadal watches. In terms of price, well-maintained models sell for around 146,000 USD.

Its intricately skeletonized movement weighs only 4.3 g and sits inside a case made of an alumagnesium (aluminum-magnesium-copper) alloy. This alloy is extremely light, corrosion-resistant, and hard. While the RM 035 lacks a tourbillon, it comes with a Chronofiable® certificate. To receive this Swiss quality distinction, a watch has a pass a series of accelerated aging tests. These tests check how the watch responds to impacts, acceleration forces, moisture, magnetic fields, and changes in temperature. The total process simulates six months of wear in only three weeks.

Richard Mille rereleased the RM 035 in 2017. There are now two versions available: one in solid 18-karat rose gold and the other in a combination of ceramic and rose gold. For the latter, the case's main body is made of rose gold, while the case front and back are made of matte black ceramic. Both editions are limited to runs of 50 pieces and were only released in North and South American markets. You can find these timepieces in very good to mint condition on Chrono24 for about 314,000 USD each.

The most exciting thing about the Richard Mille RM 35-01 Rafael Nadal is its case. It's composed of layered carbon NTPT (or carbon fibers), an extremely hard material. Each layer is no more than 30 microns thick. The complete watch case measures 50 x 42 x 14 mm and has a distinctive texture. This Rafael Nadal watch is water-resistant to 50 m (164 ft).

The manual caliber RMUL3 ticks away inside this timepiece. Like that of the RM 035, this movement is heavily skeletonized. It also features double barrels and comes with a 55-hour power reserve. Prices for a RM 35-01 in very good condition fall between 179,000 and 202,000 USD. Mint-condition pieces are extremely rare and usually cost a few thousand dollars more.

The Richard Mille RM 35-02 Rafael Nadal was the first Nadal watch to feature an automatic caliber. Its in-house caliber, the RMAL1, has an especially efficient rotor that can be set to match the wearer's lifestyle. For example, if you don't move your arm that much, the rotor swings more quickly. However, on the tennis court, the rotor slows down so that it winds more efficiently. Fully wound, this timepiece has a 55-hour power reserve. As with the RM 35-01, the RM 35-02's movement is skeletonized.

The Richard Mille RM 35-02 Rafael Nadal comes in your choice of a carbon NTPT or red quartz TPT case. Both cases are crafted from composite materials that form a unique texture. In the NTPT version, it's wafer-thin layers of carbon fibers, while the quartz TPT edition is composed of thin layers of quartz and artificial resin. The red quartz TPT case with white streaks is truly captivating. It is available on a red or yellow strap. If you're interested in the red Rafael Nadal RM 35-02, be prepared to spend about 202,000 USD on a never-worn piece. Pre-owned watches change hands for some 179,000 USD. The black carbon RM35-02 is somewhat more expensive, with prices ranging from 212,000 to 270,000 USD.

Why are Richard Mille Rafael Nadal watches so expensive?

Richard Mille Rafael Nadal watches are some of the world's most exquisite and expensive timepieces. It's difficult to find a new RM Rafael Nadal watch for less than 100,000 USD. The prices are so exorbitant due to the labor-intensive production process. Constructing the case alone is extremely complex and demands a major time investment. The cases are usually domed, barrel-shaped, and made of state-of-the-art materials like carbon fibers and magnesium alloys. Thanks to these materials, Richard Mille has reduced the weight of their watches to record-breaking levels.

Developing unique and complex in-house movements also requires large sums of money. Richard Mille is renowned for offering innovative technologies you won't find from any other manufacturer. What's more, producing beautifully skeletonized movements is immensely time-consuming. All these factors – and a few more – result in exclusive timepieces reserved for the lucky few. If you own a Richard Mille timepiece, you belong to a very small group of individuals and connoisseurs that includes Ferrari owners and those with yachts anchored along the French Riviera.